Pete and I Brave it Alone

That day finally came. We were able to take Emma Ward home for good. After her first sail, she needed to return to the slip to have the mast step rust proofed and two leaking windows fixed. Our little baby was ready to come home.

Was I a little bit nervous in handling those humongous sails on my own, most definitely.  Just like Kotuku only a bit bigger I kept saying to myself. No problem.

We knew that Emma Ward hadn’t sailed for at least two years, so we were also a little concerned about being out in the harbour and then suddenly breaking down. She was in great condition and had been well maintained however when machinery isn’t used regularly, that’s when it starts to break down.

So, we just had to get out there and give it our best. Out the lock, through the channel and away into the harbour. It’s common practice for us to motor until we reach the end of Stokes Hill Wharf where the sails are then hoisted. We didn’t even get to the beginning of the wharf when the engine just stopped. Right. What do we do now? We looked at the engine. It was a quagmire of hoses and clamps.  So we were drifting, literally. Better put the anchor down so as not to run into other boats. Second problem. How do you do that? Kotuku was easy, just lower it in. Emma Ward had a winch and we were unable to get it working.  I was becoming a little anxious as we were drifting towards another boat and all I could do was basically stand at the bow to push us off if we got too close.

Then I heard Pete on the phone. He had called a few people who he thought could help. Jackpot. As luck would have it, he had exchanged business cards with the marine engineer before we left Cullen Bay who was able to get hold of a dinghy and come to our aid.

The issue, one little impeller with a big important task. We took photos and notes for reference. Thanked our lucky stars and went on our way. 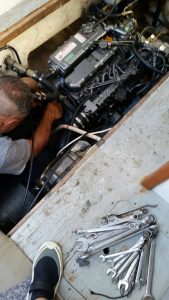 Looking for broken off impeller pieces through the engine. 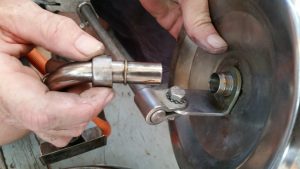 That day we took with us a few important lessons. First, if we are going to circumnavigate Australia, we will need to learn about diesel engines. Second, we should have asked questions on how to use the anchor. Thirdly, I think there was a bit of naivety going on. We were so excited about our recent purchase and learning how to sail that we overlooked the fact that one must be prepared for the crazy to happen when out at sea.

From that day on we have pledged to learn as much as we can about our yacht. Our aim is to be as self sufficient as possible as well as knowing how to fix as much as we possibly can.

The Easter long weekend was finally upon us, the time had come to take her out for our first sail. It was an exciting day. Our very own yacht. I couldn’t wait to spend some time down below. It’s the same feeling you have when you finally move into your own dwelling. Wow, it’s ours. I wanted to touch all the buttons and check all the dials, open every cupboard and hatch, turn on all the lights, fans, make a coffee and have that comfy home aroma.

We decided to collect her from the slip at Cullen Bay, sail around the harbour for a few hours and then berth her at her new home in Bayview. 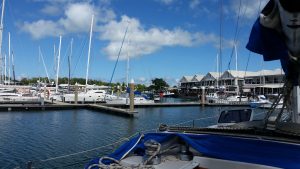 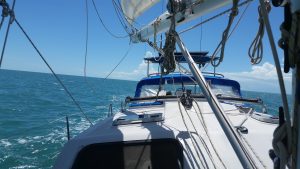 The day went very fast and without a hitch. I was nervous about managing a 43ft yacht as opposed to the previous 27footer. One of our friends said, ‘it’s just like Kotuku, only bigger’, ahhh yeah….a slight problem for a vertically challenged person such as myself. I don’t recall managing any sails that day. I’m pretty sure I stood back and let the reality of it all just soak in. I was quite happy with that for the time. 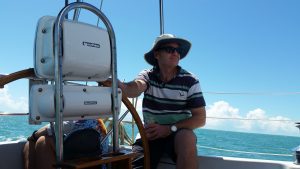 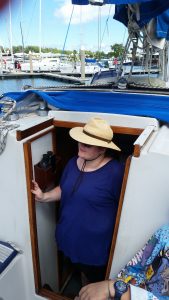 Vicki in control of the office. 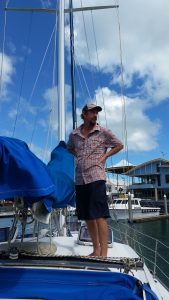