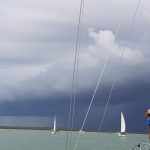 Crew numbers were down for this race.  The weather was good with a forecast of northwesterly at 10 to 15 kts and seas about 1 meter.  Approaching the start line we were about 20 seconds too early and so had to do a 360 turn.  We crossed the start about 2 minutes behind the rest of the field.

However, Emma quickly made up this ground and we hit the front after the first mark.

After the second mark there was a long spinnaker run, so out came the purple monster. due to the limited crew we had some issues getting the kite flying but eventually got it up.

We lost a bit of time, but again made this up pretty quickly.  No other boats in sight as we turned for home,

Safely across the finish line but with a massive storm fast approaching, the order was given to drop the sails as quickly as possible.  It was not a moment too soon. the storm hit us like a sledgehammer.   Visibility was down to about 20 meters and the wind was gusting between 35 to 40 kts.  We had the motor going but the force of the wind meant we stayed in the same spot. 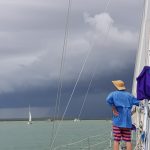 Whilst some of the crew kept safe below. Captain Peter remained at the helm, with Greg keeping a good lookout to make sure that all other boats were clear.

The storm lasted about 45 minutes and the it eased off enough to allow us to head back to Bayview.

At presentation we got second place on handicap.  However, considering that only three boats finished it was a bit of a hollow result.  watching video after showed some of the boats getting hit by the storm and so we were just happy to have made it across the line and got our sails down just in time, 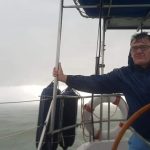 Next race in two weeks and hopefully the weather will be kind.

Amidst the storm, there was time for birthday cake. Happy birthday Kathy. 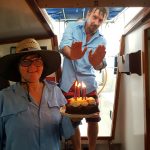