This weekend we decided to start our scheduled engine service. Being our third year into owning a yacht, we are still learning, documenting and trying hard to remember all that needs doing…constantly.

First step was the impeller.We thought that would be a nice easy start to our engine service. Last year we had a lot of difficulty with getting the plate off. I had tried to use a flat head screw driver. Nope, I couldn’t budge those screws, so ended up calling our engineer friend, who swiftly made a trip down to the marina and talked us through every step of the impeller change. This year, we were very confident in managing this task ourselves. I now know that we need an 8mm spanner to move those screws. Oh, and whatever you do, don’t drop anything into the bilge. Butter fingers fail. Lucky Pete has long arms. Fantastic, we got through step one. Getting the old impeller out proved a little bit tricky. Eventually, and I will not disclose how long it took, we got the old one out. Putting the new impeller in should be a breeze, right. Well, it will be now that we know it needs to be greased first.

This whole process took us close to three hours. I kid you not. The hard part is mainly due to the engine configuration. The array of hoses that get in your way and the lack of space makes an easy job take such a long time. However, the smile on our faces and the huge feeling of success was beyond words. We did it. By ourselves.

Step two, air filter change. Too easy, out with the old , in with the new.

Step three. Fuel filters. There are two of them a primary filter and secondary filter.

Remove the top handle from the primary filter.

It was difficult getting photos of this process, due to the location of parts. Basically, I had to pump this little lever, (Pete says it is the manual fuel pump) which I couldn’t see just had to feel for it, until fuel flowed freely from this screw which was loosened to allow the air bubbles to escape.

It took a lot of pumping, eventually the air bubbles subsided and fuel flowed.

We started the engine with all fingers crossed hoping that we did everything right.

The engine started. the water flowed out of the exhaust and she ran really well, After running her for a bit, we turned off the engine and gave it a good clean. The end result, a fully serviced clean engine, ready for dry season sailing. A fantastic result.

The more we learn, the more confident we are becoming in our ability to do some long term cruising. With the knowledge we are gaining in rough weather during the Wet Season races and our ongoing knowledge of the engine and electrical system, we are confident in our ability to be somewhat self sufficient. If Captain Pete could learn how to catch a fish, that would be a bonus.

Fixing the side windows on Emma Ward 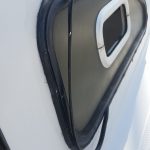 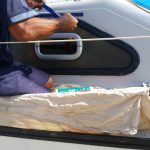 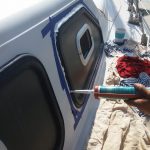 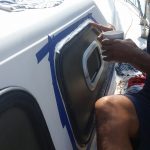 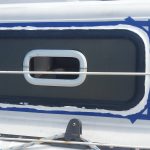 Living in the tropics has many advantages. All round summer weather whilst enjoying a  mojito cocktail by the pool. Unfortunately on the downside, is the toll which hot weather takes on everything! Which leads to today’s handyman job, fixing the leaking windows. A few weeks ago, we had quite a storm with lots of cooling rain. Great for the land, not so for leaky windows on a yacht. We went to see Emma Ward on the following day to discover about an inch of water on the ledge behind the settee. The back of the settee was also quite wet where the rain had leaked in.

As we sponged up the water, we remembered that prior to purchasing Emma Ward, as she was in the slip having a pre purchase inspection, the marine engineer has discovered two leaking side windows, which he fixed. Now, eight months on, being exposed to the tropical sun, the rubber strip has deteriorated and needed repairing.

Hopefully, all is sealed now. To be checked upon the next downfall of rain.

A quick post about the mixing elbow. When our good friend the marine engineer rescued us from the impeller incident, he also discovered that the mixing elbow was leaking. Just a simple fix, he said. Take it in for welding and it will be good as new. Sure thing, too easy.

When you have a boat, there is no such thing as an easy fix. We went back to the marina the next day to take off the mixing elbow and have the leak welded. As you can see in the picture, the whole thing just fell apart. 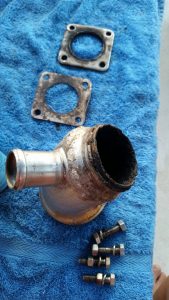 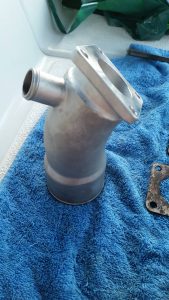 As with most things here in the Top End, it seems to be much easier and quicker to order on line. So, we did. Cheaper, and delivered to your door in three days. As soon as it arrived, we went and fitted it ourselves. How proud we were. I know it sounds a little silly, but Pete and I are not very handy. I barely know the difference between spanners, screwdrivers and how is it possible to have so many different nuts and bolts and bits and thingamajigs.

We achieved our first important repair, with a positive ‘we can do this’ attitude.